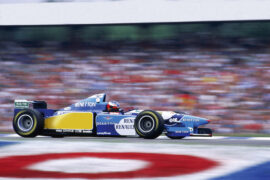 Okayama International Circuit opened in 1990 (as TI Aida) primarily as a high-speed sports club, the private playground for members and their exotic sports cars. It was the vision of Hajime Tanaka - perhaps unsurpisingly a millionaire golf course magnate - whose ambitions ultimately lay far higher.

After hosting local Formula 3 and touring car races, it was something of a surprise when Aida was announced as round two of the 1994 Formula One calendar. The regional police were slow to grant permission for the event, fearing horrendous traffic and crowd problems at the remote circuit . The solution? Around 1,500 coaches were used to ferry people to and from the parking areas - some 20 miles away!

The race stayed on the calendar for a second year in 1995, but it was never likely to last longer than that. The mountainous circuit is certainly in a pretty location, but the track itself is extremely tight and twisty, with F1 cars struggling on full lock and in no higher than third gear for the infield section. "It's like the Hungaroring - but with slower corners and fewer overtaking opportunities," reckoned one racing driver after lapping it in a McLaren F1 supercar.

Despite the loss of Formula One, the circuit had established itself as one of Japan's top facilities and continues to host the top national series. The circuit was renamed Okayama International Circuit in 2005.