Lewis Hamilton claimed his fourth win of the season with a routine victory in the Canadian Grand Prix.

The Englishman for the majority of the race and eased home for a comfortable win from his team-mate Nico Rosberg.

Rosberg pushed hard behind Hamilton, but ultimately he failed to put him under too much pressure.

Both drivers struggled with brake and fuel problems late in the race, which ended any chance of a battle between them.

The Mercedes drivers were followed home by Valtteri Bottas for Williams and Ferrari’s Kimi Raikkonen.

Raikkonen was set to challenge the front two, but a spin at the hairpin ended his chances and he slipped behind Bottas.

Raikkonen’s team-mate, Sebastian Vettel, made good progress from 18th early on, and eventually battled to fifth.

Felipe Massa also impressed as he made up 11 places to finish sixth.

However, there was more mis-fortune for McLaren, who had to retire both drivers due to engine problems. 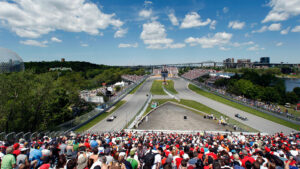