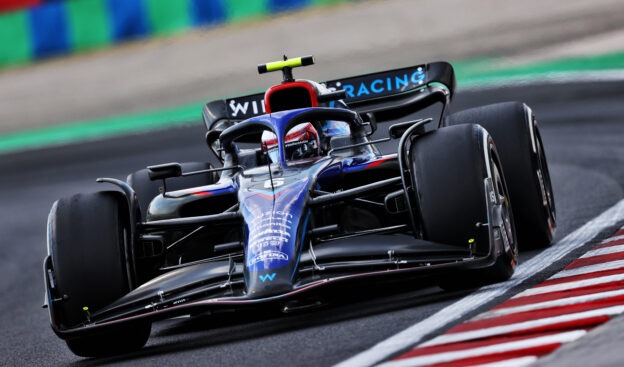 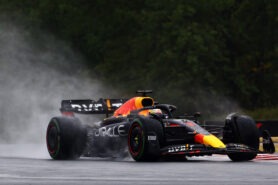 The weather had changed completely this third practice for the Hungarian F1 Grand Prix. Compared to yesterday's practice which had completely dry and sunny circuit conditions, the tarmac now was very wet and it was still raining at the start of the final practice.

Both Ferrari drivers Charles Leclerc and Carlos Sainz were the first to come out of the pits to get some laps under their belt on the full wet (blue sided) tyres. Leclerc set the first lap time on the timesheet, which was a 1:46.044 min.

After 10 minutes only the both Ferrari drivers and McLaren driver Lando Norris had clocked a lap time. A lot more drivers now came out the pits to start their session as the rain had changed to a light drizzle. Leclerc was on P1 and had improved his quickest lap time to 1:43.364 min.

Fifteen minutes into the FP3 session still only fifteen drivers had put a lap time on the timesheet. Alpine driver Fernando Alonso did try out a set of intermediate tyres, but had to switch back to full wets as the rain had increased again. Both Mercedes and Red Bull drivers still had not gone out yet.

A few moments later Hamilton did go out. His first lap time with the W13. He was only 17th with a 1:48.063 on a set of full wets. His teammate George Russell also was struggling to get up to speed in the wet and only was 16th. 10 minutes later it seemed to have stopped raining.

With 18 minutes to go Alonso was the first to start pushing hard on a set of intermediates and almost lost the Alpine A522 coming out turn 3. The two times champ had a massive oversteer moment and was just able to correct it and keep the Alpine on the black stuff.

A little later Leclerc even experienced a full 360 spin on the same spot in the Ferrari. He was on of his first lap out on the intermediates. Verstappen now also had come out the pits to do some laps with the RB18 and used the intermediate tyres right away. It took a while for him to get some heat into his tyres, but his first lap time got him on P9. Both Mercedes drivers were complaining a lot about their tyres were way to cold.

With 9 minutes to go Vettel spun off when he lost the rear end coming out of turn 10 and crashed the Aston Martin AMR22 backwards into the barrier. His crash caused a red flag and all cars had to return to the pits. It took five minutes for the marshals to recover the Aston Martin and the session got restarted.

When the session restarted the track got quicker by the second as the sun also had come out. In the end Williams driver Nicholas Latifi showed the revised FW44 is very quick in the wet and was an amazing 0.661s faster than Leclerc in the Ferrari!

1:16.826 min was the fastest lap time of last year's dry FP3 in Hungary. It was clocked by Hamilton with the Mercedes W12. 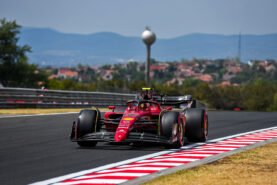 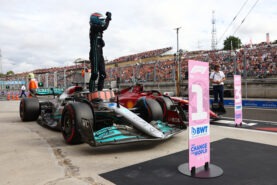