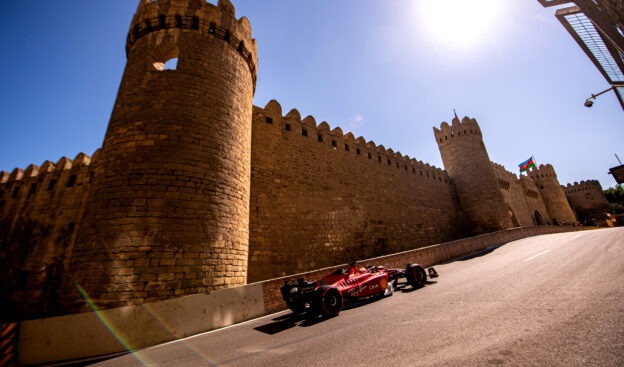 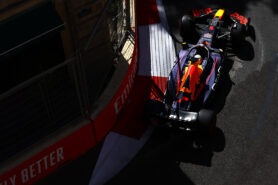 Charles Leclerc qualified as quickest for the 15th time today. The Ferrari driver scored his second  pole position for tomorrow's 2022 Azerbaijan Grand Prix. It was the sixth pole of the season for the Monegasque driver and the 236th pole for the Ferrari team.

Because the qualifying session started at 18:00 hours local time, the track and ambient temperature started to drop. Which is better for the engine's horsepower, but worse for getting the tyres up to temperature.

After all drivers had set a lap time Max Verstappen was quickest with a 1:42.938 min. Is teammate Perez was second on +0.260s and Ferrari driver Leclerc was third on +0.287s.

Further into the session the quickest lap time was set by Lelcer, Pérez and than Verstappen again.

With 2:30 minutes to go the session got red flagged when Lance Stroll hit the barrier for the second time. The first time he went straight on in turn 7. One lap later he didn't hit the apex in turn 2 and crashed into the barrier and wrecked the left-front of the Aston Martin.

When Q1 restarted 13 cars went out to improve and had to fight hard to get heat in their tyres. Bottas just made it to Q2 and pushed out Haas driver Kevin Magnussen.

In the first run both Ferraris ended up on P1 and P2 after the first run. Carlos Sainz was on top for the first time this quali. With 7 minutes to go Aston Martin driver Sebastian Vettel gone straight into the barrier at turn 15. Fortunately for him the front wing didn't seemed to be damaged and Vettel could carry on.

Hamilton almost stood still on the track in the twisty section to try and get a tow on the mainstraight. In the end Hamilton made it into Q3 and pushed out Norris.

In the second and last run Sainz again was first on the track and looked fine until he run a bit wide at turn 2. Leclerc was flying and improved over an incredible 0.5s on Sainz's time to score pole position again.

Last year the pole time was a 1:41.218 min, also driven by Charles Leclerc with the Ferrari. 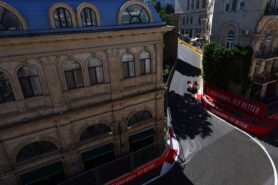 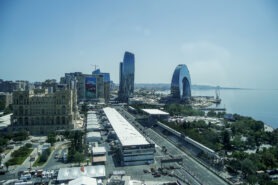