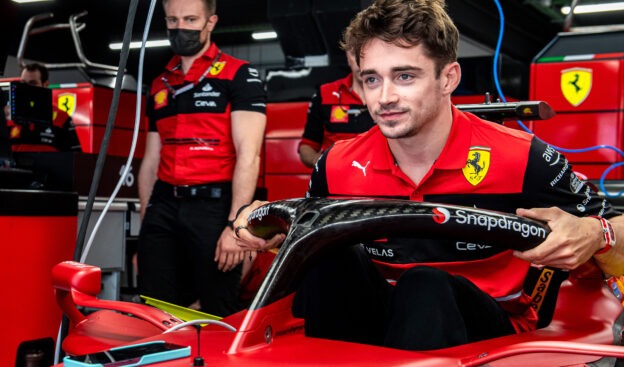 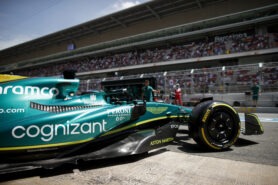 The first practice session for the 2022 Spanish Formula 1 Grand Prix started off quite busy. 7 cars went out right away when the pit light turned green. Two of those drivers made their F1 debut today. Red Bull put Juri Vips into Sergio Perez' car.

The other new name was Nick de Vries who got his first taste of F1 in the Williams FW44 of Alex Albon. Robert Kubica was the third driver that took over a car from the 'normal' race driver as he drove the Alfa Romeo of Guanyu Zhou.

De Vries might have a chance to show his talent against the other Williams driver NIcholas Latifi. De Vries won the Formula E championship last year while Latifi crashed a lot of times in the last 7 races.

After five minutes Max Verstappen clocked the quickest lap time and set it to 1:23.163 min. His championship rival Charles Leclerc was second fastest on only 0.1s. Both were using the hard compound Pirelli tyres.

After ten minutes Vettel was standing next to his Aston Martin AMR22, waiting for the mechanics to get his car ready again for the rest of this first practice. When Verstappen improved his lap time to 1:22.394 min.

Traditionally the Spanish GP is the race with were the teams bring a lot of car upgrades. A lot of teams used aero racks to compare their windtunnel measurement in the real world ans 1 to 1 scale. The wind tunnel scale used by F1 teams is 60%. 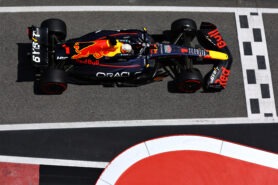 Max Verstappen driving the Red Bull Racing RB18 in the Pitlane during practice ahead of the F1 Grand Prix of Spain at Circuit de Barcelona-Catalunya on May 20, 2022 in Barcelona, Spain. (Photo by Mark Thompson/Getty Images)

20 minutes into FP1 McLaren driver Daniel Ricciardo showed some good pace by being fourth fastest in medium tyres. The Australian driver was a considerable 0.9 sec. slower than Verstappen who now had improved to 1:22.143 min still on the hard tyres. George Russell was third and 0.2s faster than Ricciardo in the updated Mercedes. The upgrades brought by Mercedes towards Spain did seem to work quite good, as the W13 didn't show any porpoising effect anymore.

Aston Martin also had brought a huge sidepod update that remarkably looked a lot like the Red Bull design. Lance Stroll said the team had designed the car during the winter...

De Vries showed he can be very quick in the Williams on soft tyres and even ended up 4th with a 1.22.936 min. The Dutchman even had some traffic in the last sector.

Halfway the session home driver Carlos Sainz also switched to the much quicker soft tyres. The Ferrari driver even went two seconds faster than Verstappen and recorded a lap time of 1:19.907 min.

With 22 minutes to go already 10 drivers had fitted a set of soft tyres underneath their car. Both Ferrari drivers were quickest with Leclerc only +0.079s  in front of Sainz. Verstappen was third (+0.336s), Russell fourth (+0.762s) and Hamilton fifth on +0.983 sec. Both McLarens where 6th and 7th with Norris quickest.

The new driver called Vips who was the other driver that made his F1 debut today was probably instructed to run a data gathering program. The Estonian driver was lapping the Catalunya track almost 10 sec slower than Leclerc. The Red Bull driver only had used hard tyres until 15 minutes before the end. Later on he did drove some laps on soft tyres and was 5 sec. a lap faster.

Last years quickest lap time of FP1 was a 1:18.504 min, driven by Valtteri Bottas with the Mercedes W12. 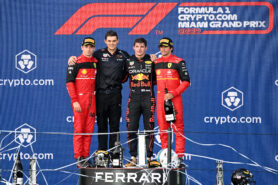 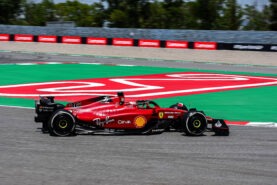