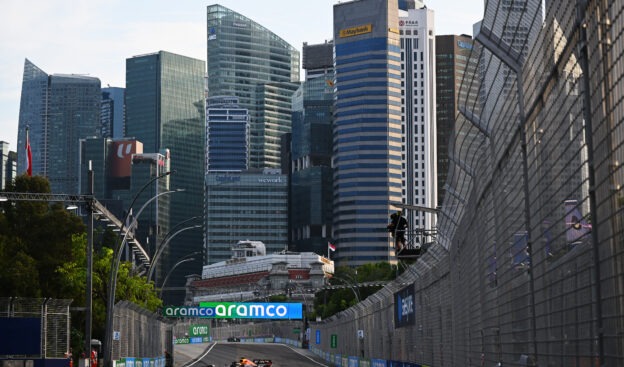 After a two years absence the streets in downtown Singapore again were taken over by F1 cars. The first practice session for the 2022 Singapore was still driven in daylight.

The McLaren MCL34 was fitted with again a new sidepod design. The design has smaller air intakes and looks now similar to the sidepods of Red Bull. Ferrari also brought some updates and is using a new floor to get more performance from the F1-75.

All cars and drivers came out right away to get some experience around the Marina Bay track. In the 15 minutes Mercedes driver George Russell ended up head on softly in the barrier at turn 11 and was able to go on. Red Bull driver Max Verstappen was flying right away. The Dutchman lapped the track in 1:44.236 min in the RB18 and was 1.886 sec in front his teammate who was on P2. Both using the Medium compound tyres.

Just after the first quarter of the session Alpine driver Fernando Alonso went quicker than Pérez, but still was an amazing 1.1 sec. behind Verstappen also on the Mediums.

With 20 minutes to go Lance Stroll hit the wall with his Aston Martin and broke his rear left suspension. He was able to drive back to the pits to get the needed repairs. In the end he was able to go out again.

With 5 minutes to go Hamilton moved up to P1. The Mercedes driver had fitted a set of Softs and was 0.084s quicker than Verstappen who now was second. Charles Leclerc was 3rd in the Ferrari on +0.4s, will that mean we will have three teams battle this weekend? 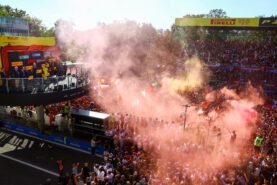 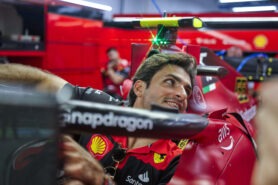