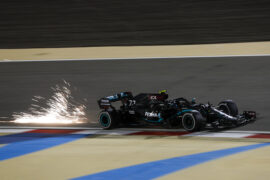 Valtteri Bottas scored his 16th F1 pole position of his career, during the 2020 Sakhir Grand Prix qualifying session today. The Mercedes driver will start from P1 for the first time in his career at Bahrain. It was the 126th pole for the Mercedes team.

Q1
The drivers were very worried about traffic during qualifying on the short and quick track in the desert. Except for Alfa Romeo driver Antonio Giovinazzi, we saw the The usual cars didn't made it to be quick enough to get into Q2. Except the driver in it were different today. Nicholas Latifi will not be a happy chap, being beaten by first-timer Jack Aitken.

Q2
In this session the time differences were unbelievable close. Carlos Sainz and George Russell only were 0.001s apart. In the first stint six drivers tried to get to Q3 on medium tyres, but 4 had to switch to soft tyres to not be eliminated. Only George Russell and Valtteri Bottas made it to Q3 on the medium tyres.

It was an amazing sight to see that the top 10 was less than 0.3s apart. Lando Norris, Esteban Ocon and Alex Albon were surprisingly to slow.

Q3
Bottas was the first to hunt for his 16th career pole and drove a 53.760s, but Verstappen gone even quicker and after the first stint he was on top with 53.591s. Both Mercedes drivers did a second run in the first stint and Bottas found how to go faster to time a 53.377s which was P1.

In the second stint all cars except the Ferrari of Charles Leclerc went out again with a new set soft tyres. Verstappen did improve his time but it was not enough to get P1 back. 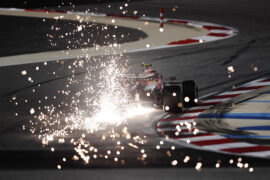 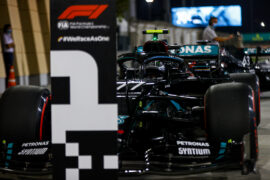