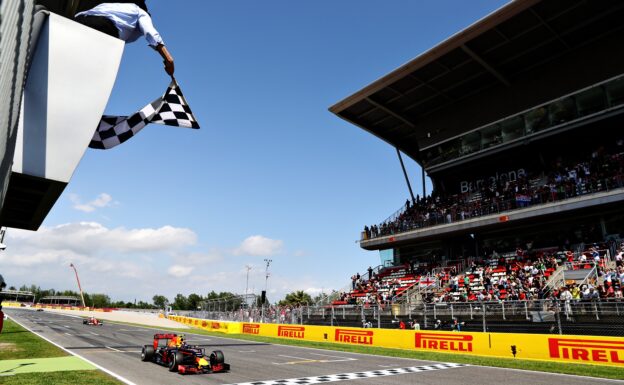 Max Verstappen became the youngest F1 winner ever in Spain today with a measured and controlled victory ahead of Kimi Raikkonen.

The 18-year-old was promoted from Toro Rosso to Red Bull after the last race in Russia, and proved bosses correct with a stellar performance.

He fended off the challenge of Raikkonen in the final 15 laps, after the Mercedes duo of Nico Rosberg and Lewis Hamilton dramatically crashed out on the opening lap.

Hamilton lost the lead to Rosberg, but while attempting to get back past he went onto the grass and slid into his team-mate, knocking them both out.

Sebastian Vettel secured Ferrari a double podium finish in third after he held off Daniel Ricciardo - who lost out due to a puncture on the penultimate lap.

Verstappen, starting fourth, was up to second on the first lap as the Mercedes pair crashed.

Rosberg made a superb start and overtake to take the lead before he lost battery power through turn 3.

Hamilton capitalised and moved across for a overtake, but Rosberg cut across him and forced him wide.

Hamilton spun on the grass and crashed into Rosberg, leading team boss Niki Lauda to blame him for the incident.

Red Bull took control, but Ricciardo and Vettel opted for an extra stop leaving Verstappen and Raikkonen in charge as long as their tyres lasted. 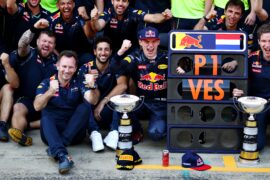 Raikkonen closed up to the back of Verstappen but couldn't make a move and preserve his tyres at the same time.

Vettel and Ricciardo were closing up to the pair with a few laps left, but Ricciardo's daring moves slowed their progress before his puncture. 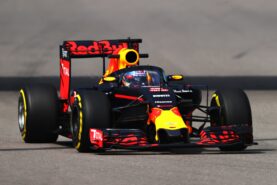 New 'halo' version to be tested in Monaco 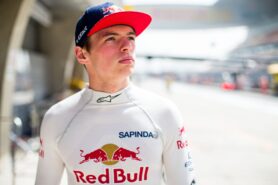