Former F1 driver Jan Magnussen's comments came on the same day that the small American team admitted that both his son and Romain Grosjean are being ousted at the end of the year.

"It's a pity that it has got to this in Formula 1," Jan Magnussen told BT newspaper.

"Of course I don't think it's fair. This decision about Kevin has nothing to do with his ability or what he did on the track."

Magnussen senior said his son is "not necessarily done with Formula 1", but he admits that there are "not many options left" on the grid for 2021.

Thursday's news could also mean the end of Romain Grosjean's F1 career - and the Frenchman is not hiding it.

"It could well be that this is the end of my Formula 1 career," he admitted. "You should never say never and doors can always open, but I'm looking outside of Formula 1 for the 2021 season and beyond."

He is linked with Peugeot's 2022 Le Mans project, while the official Formula E Twitter account on Thursday re-tweeted news about Grosjean's reported simulator test for the Mahindra team.

Grosjean said: "I imagined that one of us would have to go, but to be honest I am surprised that it is both. I may have underestimated the financial aspect.

"The corona crisis has certainly not improved the situation, and Gene Haas may have asked himself how much money he should invest out of his own pocket," the Frenchman added.

Magnussen, meanwhile, admitted that a move to Indycar cannot be ruled out for 2021.

"My father drove there in the 90s and I always thought it was super-cool. But in our complex times, I don't know if I can put something together in America," he said.

The Dane echoed his father and Grosjean's view that the Haas decision is money-driven.

"I do have some sponsors, but compared to what other drivers can offer, it's not enough. My options are limited," Magnussen said.

"To be honest, I miss the feeling of winning races, and that might be easier in another category."

"We have to also look at the money a driver can bring," he said. "There are some drivers with sponsors behind them, but talent is always more important than money." 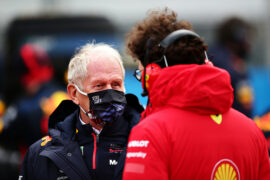 Red Bull not yet ruling out F1 exit