Dec.2 - Gunther Steiner has defended his decision to sign Nikita Mazepin for 2021 and beyond - and denied that the Russian's father Dmitry is buying the small American team.

While Mick Schumacher's expected deal is still yet to be announced, Haas finally revealed the open secret about 21-year-old Mazepin's contract on Tuesday.

"Mazepin is third in Formula 2, (Yuki) Tsunoda is fifth," Haas boss Steiner said on Tuesday when challenged about the Russian's ability to effectively replace drivers of Romain Grosjean and Kevin Magnussen's quality.

Mazepin has earned a reputation as a 'pay driver' because of his wealthy father, whose company Uralkali tried and failed to buy Racing Point last year.

But Steiner denies that the Russians will now buy Haas.

"The team is not for sale, so there is nothing to buy," he insisted.

However, critics point out that Mazepin snr is renowned for financially championing the career of his son - including by 'buying' the forthcoming Abu Dhabi young driver test seat for Nikita.

Steiner doesn't rule out that Uralkali may now become a sponsor of the team.

"I have been in contact with Mr Mazepin for some time. He is well known in Formula 1," he said.

"Last year we discussed how things were going, talked about Nikita. The negotiations took some time, but there was no pressure. When we decided to change our drivers, we remembered him so now he is with us.

"From the outside the situation seems more complicated than it really is."

As for Mazepin sponsoring Haas, though, Steiner admitted: "Haas has made a name for itself in Formula 1, but we are looking for commercial partners of course.

"Dmitry Mazepin has a company, so if everything goes well and he sponsors us, why not?" 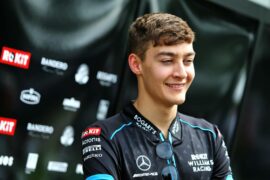