The news was reported by multiple authoritative publications, including the major German newspaper Bild.

In mid-April, Sport Bild - another Alex Springer publication - claimed that Carey would "soon" be leaving Formula 1.

Bild correspondent Lennart Wermke now explains: "The American businessman never really warmed up with Formula 1 and now wants to go back to the USA."

Domenicali, who like FIA president Jean Todt is a former Ferrari team boss, is expected to commence his new role as head of Liberty Media's F1 operations prior to 2021.

The 55-year-old is currently Lamborghini CEO, but he also heads the FIA's single-seater commission.

Wermke said: "Domenicali has the necessary expertise, he knows the sport as a team boss and FIA official, and he also has enough commercial understanding.

"But it's hard to imagine that Mercedes, Red Bull or McLaren will accept a former Ferrari team boss as boss of Formula 1, so the coming days will be exciting." 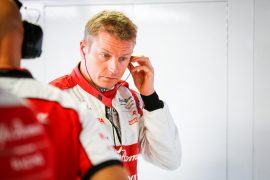