After two years out of a race seat, the Spaniard says he is still in top physical and mental shape at the age of 39.

"Psychophysical tests show that I am as fit as I was in 2010," he told the Italian newspaper Corriere della Sera.

"I also think I am more mature than ever. I have analysed my driving to correct any defects and my speed remains intact. My experiences at Le Mans and Indy gave me a lot of useful data."

Indeed, Alonso was even quicker in the 2020 Renault for the comically-titled 'young drivers test' early this week than were Daniel Ricciardo or Esteban Ocon in the Abu Dhabi finale.

"What am I afraid of?" Alonso asked rhetorically. "A calendar of 23 races. It means having about 20 days off in the whole year."

It's on that front that the younger drivers may cope better, but Alonso said modern Formula 1 is making it difficult to figure out which of them is the best.

"It's difficult to answer," said Alonso, "but the (George) Russell case is the most interesting. In five days - not 100 - he went from last to first. All without a divine touch or meditation in Tibet or anything like that," he laughed.

"It was enough just to get in the Mercedes. But if we talk about who Hamilton and Bottas see the most in their mirrors, it is Verstappen. Leclerc is an exceptional talent but it will take a few years to really assess him."

As for his personal predictions for 2021, Alonso said he is targeting more than "three podiums" - the amount jointly secured by Ricciardo and Ocon this year.

"I want to improve that score. And later, much more than that," he said.

"They (Mercedes) will win again in 2021, Red Bull will fight for second place and it remains to be seen who will be third," he said.

"The real challenge is 2022, but F1 does not seem to have changed," Alonso explained. "Same people, same rules. Who was strong two years ago is strong today.

"As for me, I am a little different. I wanted new challenges, I had the time to face them and I think my mind and body have improved. I am more relaxed in terms of what I demand of myself." 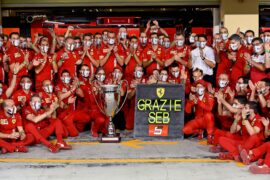 Villeneuve says final season at Ferrari was agony for Vettel 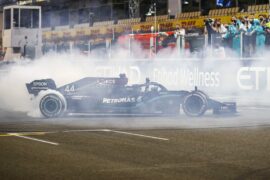 Berger thinks Hamilton's contract talks will be about money