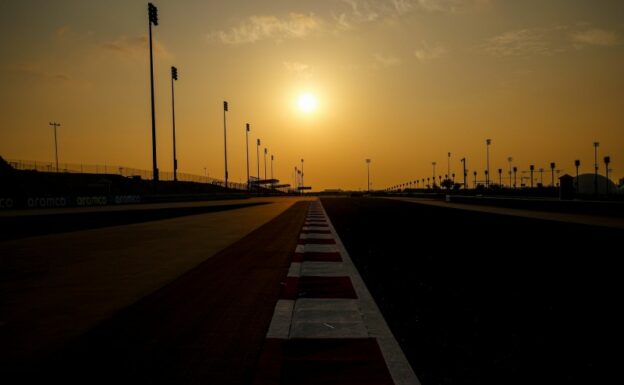 Dec.4 - The 2020 Sakhirs Grand Prix will be the 16th Formula 1 race of the 2020 calendar. With many announcements during the week, the race has become one of the most expected for lots of people.

First of all, with Romain Grosjean recovering from the minor burns suffered in his scary accident in the first lap of the Bahrain Grand Prix, Pietro Fittipaldi will take part in the upcoming race for Haas.

George Russell to drive for Mercedes

After Lewis Hamilton's positive test for Covid-19, George Russell will move from Williams to Mercedes. He could end his run of races without scoring points and has a big chance to show his abilities in a top car.

Russell will have the spotlight on him in this race. Of course, expectations are logically high, but he does not have much time to adapt to the car and jumping to quick conclusions after a small sample size would be an overreaction.

Still, he could have a big result and boost his confidence and his status among the drivers of the grid.

Aitken gets his F1 debut

F2 racer Jack Aitken will drive for Williams and make his F1 debut in place of Russell.

The outer layout of the Bahrain International Circuit will be an interesting place to see the 2020 F1 cars racing, and a track made with mostly straights could be fun for overtaking.

Red Bull can have a chance if Valtteri Bottas' run of bad luck and some mistakes continues. Max Verstappen pushed Hamilton in last weekend's race and the team could be competitive again in the second race at Bahrain. Tyres will be key too, and many stops could give the Bulls a chance.

McLaren, Racing Point, and Renault continue battling for P3 in the World Constructors' Championship. McLaren's 4-5 in the previous race was huge. 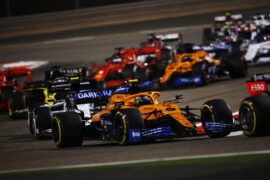 Lando Norris, McLaren MCL35, leads a gaggle of cars at the start

On the other hand, Racing Point walked out of the first Bahrain round without points. Lance Stroll's crash with Daniil Kvyat and Sergio Pérez's engine failure in the last few laps while racing in P3 were huge blows in the team's quest for third in the WCC.

Moreover, Haas and Williams could have a fight in lower places. Both teams will have a new driver on their car, however, Williams might have the upper hand in the outer layout due to the Ferrari engine being down on power.

Hamilton will see his streak of 265 races started consecutively end in the 2020 Sakhir Grand Prix. That streak is the all-time record.

This will be the 17th Formula 1 race held in Bahrain since 2004, and the first time the country celebrates two Grand Prix in the same season.

The Bahrain International Circuit is a facility with six different layouts. Four of those have received Grade One recognition by the FIA. Since 2004, 14 races have taken place in the Grand Prix layout, and the 2010 event was held in the Endurance, 6.299 km layout.

The race is scheduled to have 87 laps and the qualifying session could see the first laps in Formula 1 history under 60 seconds since the 1974 French Grand Prix. Niki Lauda’s lap of 0:58.79 seconds is the shortest lap in history in terms of duration. The Fastest Lap during that race was exactly one minute long, set by Jody Scheckter.

The dry tyres for the 2020 Sakhir Grand Prix will be the C2 as P Zero White hard, C3 as P Zero Yellow Medium, and C4 as P Zero Red soft. These tyres were worn last weekend. 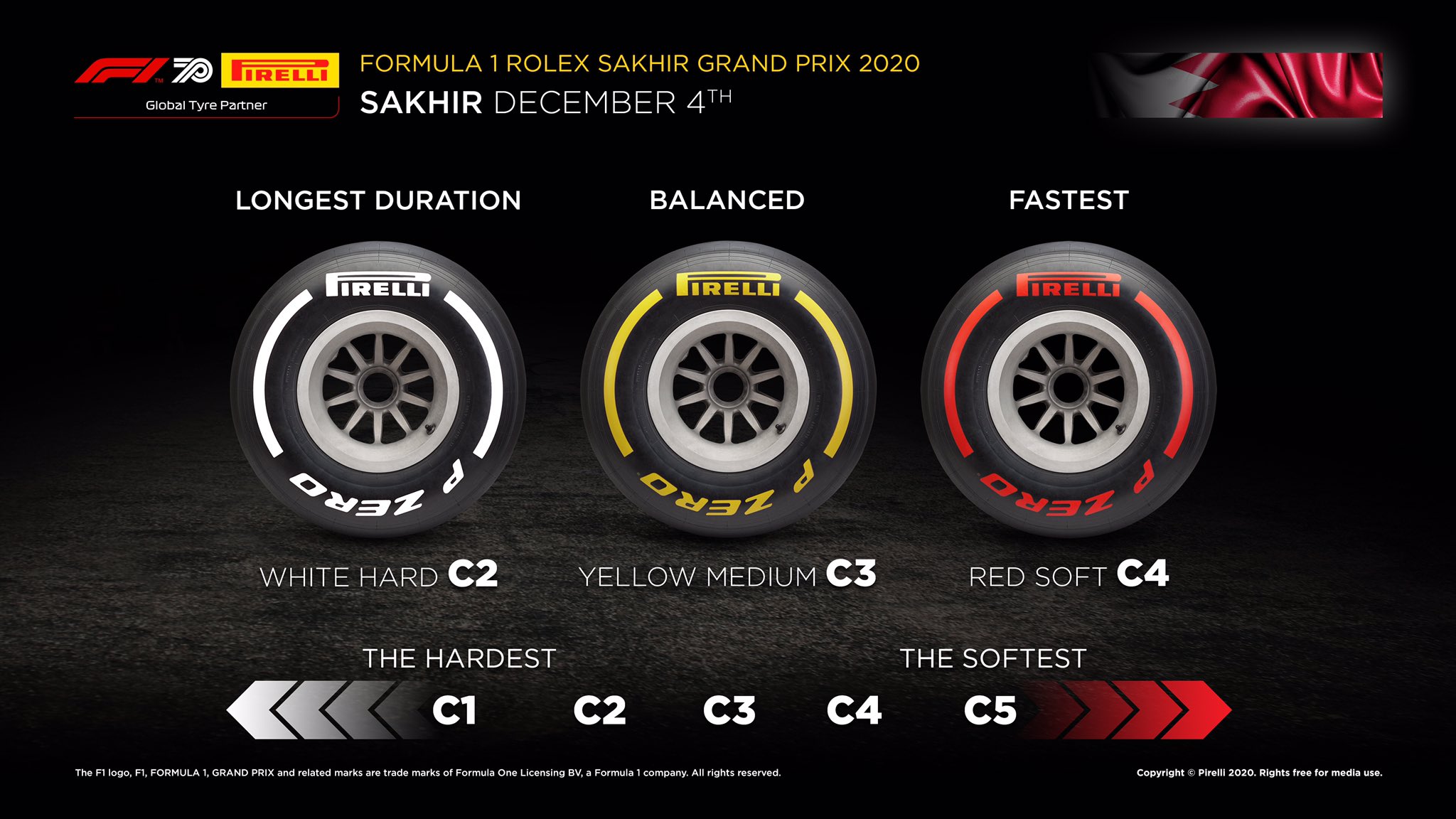 Pirelli explained their choice to go with the medium option with a statement in a press release: “Sakhir is a medium severity circuit with a focus on traction and braking rather than lateral loads and the 3.543-kilometre outer circuit – set to be among the fastest in Formula 1, with a predicted average speed of around 230kph – should be a bit less demanding on tyres than the standard circuit. The drivers will work hard though as the short lap will mean a lot of traffic that could make qualifying and overtaking tricky.”

The tyre allocation for this Grand Prix will be two sets of hard, three sets of medium, and eight sets of the soft tyres.

Who will be on the 2020 Sakhir Grand Prix podium?

This year, we have already seen that when one of the main drivers in the top teams fails to be at the front, the podium opens up for a lot of other drivers and teams. 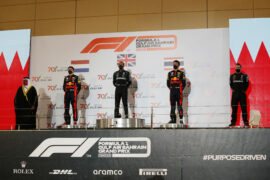 This weekend, without Lewis Hamilton, we might be able to have a tremendous fight for the podium if all cars have a similar pace and similar struggles too around the short, outer layout.

The track is quite simple, but high speeds should provide fun images and the long straights could well mean lots of overtaking opportunities.

George Russell has a big weekend in front of him. Of course, he really has nothing to lose, and trying to reach a conclusion based on his performance would be premature because he will be driving the W11 for the first time. Still, many expect even a victory from Russell, and it would really be huge for him.

A driver who really has lots of pressure on him is Valtteri Bottas. The Finn needs to overcome the previous two races, which were tough on him. But, he also has the pressure to beat Russell to maintain a certain status on the grid. If Bottas does not perform well against the young British driver, it could start lots of noise around his seat.

Max Verstappen was the only driver that could stay in touch with Lewis Hamilton last weekend and he could be even favorite to win the Sakhir Grand Prix. Of course, without the champion in the picture, Verstappen might be the best driver on the grid on race day.

An interesting weekend will also have Racing Point looking for the podium Serio Pérez lost in the final laps of last week’s race due to a blown engine. McLaren, on the other hand, performed tremendously in the long straights of Monza and might have similar performance at Sakhir this weekend.

Interesting topics all over the place.

The prediction for the top three of the 2020 Sakhir Grand Prix is 1. Max Verstappen, 2. Valtteri Bottas, 3. George Russell. 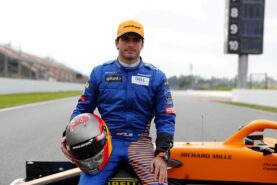 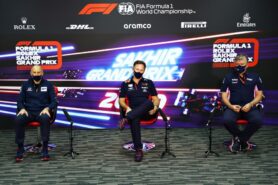