The 11th round of the 2020 Formula 1 World Championship will be the first-ever Eifel Grand Prix, at the Nürburgring GP Strecke.

With the ever-famous Nürburgring -but very different from its "Green Hell" days-, we have the second track which was not part of the original 2020 schedule. Again, the race will be a historic chance for Lewis Hamilton to claim his 91st career win, which would put him at the top of the all-time table alongside Michael Schumacher. Would you bet against the British legend tying this record at a Mercedes' home track? You should try your hand at 888 Online Betting and see if you can predict the outcome of the first race at the German track since 2013.

After the controversial race at Sochi in which Hamilton received two harsh five-second penalties for practising starts before the race in a forbidden area, the English driver should be locked in and performing at his best without getting into any trouble if he is to have a historic afternoon in Germany.

Furthermore, Hamilton needs a big result to stop his teammate Valtteri Bottas and his momentum after his success at Sochi. Bottas is 44 points behind Hamilton in the World Drivers’ Championship, which is less than what two wins are worth, so anything can happen.

Red Bull-Honda entering a weekend with lots of noise

After Honda announced the brand will leave the pinnacle of motorsport after the 2021 season, Red Bull is now immersed in lots of talks about who will be their engine supplier from 2022 on, and that noise might put some added pressure in their shoulders heading to a track in which they won in the last outing, with Sebastian Vettel in 2013. 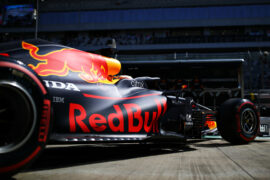 The team admitted Max Verstappen did not have a Honda-related clause in his contract, but many rumours have positioned the talented Dutchman out of the Red Bull camp in the upcoming years. Verstappen, now 77 points behind Hamilton in the title race, has had a solid year, achieving podiums in each of the seven races he has finished, but he has not been able to be a real threat to Hamilton and Mercedes championship-wise, and with three mechanical failures during races, he might be wondering if staying within the RB system is the right fit for his future.

Anyway, at the Nürburgring, Verstappen has not competed in Formula 1 (he entered the sport in 2015), but the track can offer Red Bull a chance, especially due to the unknown of a ‘new’ circuit for this era of cars and because tyres will be an interesting topic -rain can also play a part-. In the previous race held at a new track (Mugello), Alex Albon achieved his first F1 podium and Red Bull could have had a great afternoon without Verstappen’s early retirement.

Who can join the fight at the top?

The Nürburgring is somewhat of a twisty track which really has two zones of extended acceleration -the main straight and the section between turns 11 and 13-, can Renault display its potential at this circuit? The team is coming off of good results and performances from high-speed tracks, but they were fast at Sochi too, which presents fast zones but is a very technical track with lots of slow-to-medium speed corners. It will be interesting to see if Daniel Ricciardo can get close again to his first podium with Renault, while his teammate Esteban Ocon called his performance at Russia as his ‘best’ and will be looking to build on it. 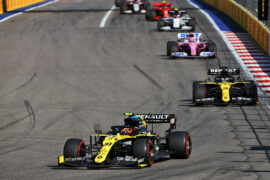 Can Racing Point and McLaren defeat Renault? That fight is too tight to try to determine anything before the on-track action has begun. The balance of power between these teams, which are fighting for P3 in the World Constructors’ Championship, often shifts from side to side and it has been a beauty to watch.

Sergio Pérez came fourth for RP at Russia and he would be expecting another big result, as he is still looking for a seat for 2021. Lance Stroll, on his side, was taken out of the Russian round by Ferrari’s Charles Leclerc and is desperate to regain the good form which saw him on the podium at Monza three races ago.

At the moment, the fights for P3 in the WCC and for P4 in the Drivers’ standings are hot -though the weather for the weekend won’t-. McLaren’s Lando Norris holds P4 at the moment, but only 20 points are separating P4 from P10 in the standings. While McLaren is in P3 in the Constructors’ trophy, two points ahead of Renault and seven in front of Racing Point, whilst Ferrari is now far back in seventh with 74 points, 15 ahead of AlphaTauri.

Among the least competitive teams, Alfa Romeo, Haas and Williams, the big news are coming from areas away from the performance. Alfa Romeo will have FIA F2 leader Mick Schumacher on Antonio Giovinazzi’s car for FP1. The son of seven-time F1 champion Michael, Mick will be making his first entry for an F1 practice session at the German track.

For Haas, British driver and another contender for the F2 title, Callum Ilott, will also be making his first appearance in a Formula 1 session, as he will take part of FP1. Both Schumacher and Ilott are part of the Ferrari Driver Academy.

Williams, on its side, is celebrating the investment brought in by new owners Dorilton Capital, as the team’s Acting Team Principal, Simon Roberts, informed.

“Our budget is based on getting towards the cost cap. This year it’s too late. We’ve only got four months to go and we’re pretty much set on where we are headed. But for next year, we are looking at what we can do and we now have the finances behind us to do that. But it’s not a given. We will only spend money and invest where it makes sense”, he explained.

The Eifel round of the World Championship will be the first-ever F1 race named after the Eifel mountains, the region where the Nürburgring is located. 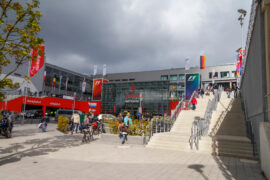 Entrance of the Nurburgring GP circuit

Having a race that is different from the German Grand Prix is not something new for the Nürburgring, as the track has hosted the European (12 times) and Luxembourg Grands Prix (1997 and 1998) before.

The current layout of the track held the German Grand Prix on 1985, 2009, 2011 and 2013, while the two Luxembourg GPs in history and the 12 editions of the European round also took place on the GP Strecke layout.

The current layout of the GP Strecke has a length of 5.148-km and 15 corners.

Sunday’s race will be the 19th event held at the GP Strecke since 1984. 12 different drivers took victories at the track for seven teams, including improbable winners Johnny Herbert and Stewart Grand Prix in the crazy 1999 European GP.

Michael Schumacher leads the ranking for most wins in the GP Strecke layout with five, all victories under the European GP name. Among teams, Ferrari is the most successful squad at the current layout, with six victories, three more than McLaren and Williams.

Schumacher also holds the Lap Record with his Fastest Lap of 1:29.468 min during the 2004 European Grand Prix.

The dry tyres for the 2020 Eifel Grand Prix will be the C2 as P Zero White hard, C3 as P Zero Yellow Medium, and C4 as P Zero Red soft. This tyre combination has been used six times in the first 10 races and it can be described as a balanced mix, as Pirelli has five compounds for the year (C1 to C5) and this is situated right in the middle.

Pirelli explained their choice with a statement in a press release: “With a wide range of corners and no recent information about Formula 1 cars on this track at this time of year, Pirelli has opted to bring tyres that cover the middle ground, to deal with a wide variety of circumstances. Previous experience has shown that the Nürburgring isn’t particularly demanding on tyres: another reason for the tyre usage to be biased towards the soft end of the scale”.

This year, teams are not allowed to select their tyre allocation, as Pirelli will give each driver two sets of hard tyres, three sets of mediums, and eight sets of soft tyres.

Who will be on the 2020 Eifel Grand Prix Podium?

Could we have a mixed podium in Formula 1’s return to Germany? Well, last year’s wet German Grand Prix at Hockenheim was interesting and we might expect something similar with the weather conditions expected for the weekend.

Hamilton should be a clear contender at a track in which he won in 2011 for McLaren and started from Pole Position in 2013 in a lacklustre Mercedes car. Motivation? Hamilton might have an explosive weekend if he is motivated by the events of the last race at Sochi, and he probably will be.

Wet weather wouldn’t slow him down, as the most impressive performance we have seen this year actually came with rain in the 2020 Styrian Grand Prix qualifying. Hamilton is likely to come out of the Nürburgring with 91 victories in his F1 resume, but it will probably not be a walk in the park, as the cold temperatures and the possible rain would be an unknown for most teams and in those situations, speed is not always the key.

Bottas should be competitive, he raced in this track in 2013 for Williams and outqualified his teammate Pastor Maldonado, though neither got through to Q2 in that session. The Finnish driver had a strong weekend at Mugello two races ago and won in the last outing at Sochi. He looked well in a new venue at Mugello and returning to the ring after seven years could have a similar feel for him.

In dry or wet conditions, Verstappen should be in the mix for the Top 3, however, pressure can come from behind as we have seen the Renaults take the fight to Red Bull at least for some laps during the last few weekends. Renault, Racing Point and McLaren would probably be praying for rain and a crazy race, as those conditions give the teams which are not part of the elite group a shot at an excellent result.

The prediction for the top three of the 2020 Eifel Grand Prix is 1. Lewis Hamilton, 2. Max Verstappen, 3. Daniel Ricciardo. 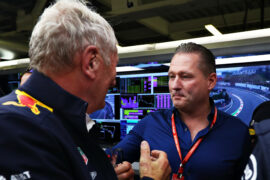 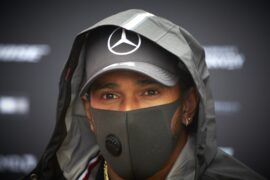