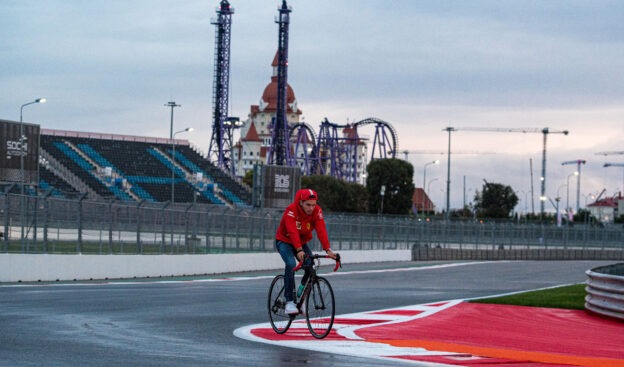 Sep. 23 - After yet another dramatic weekend at Monza, with the two title contenders crashing out of the race, the 2021 Formula 1 World Championship carries on with the 2021 Russian Grand Prix. The race at the Sochi Autodrom will be the 15th race of the season and just five points separate Red Bull’s Max Verstappen from Lewis Hamilton (Mercedes) inn the World Drivers’ Championship.

The Dutchman enters the weekend at Russia carrying a three-place grid penalty for being predominantly to blame in the crash with Hamilton at the 2021 Italian Grand Prix. Verstappen might also start the race from the back of the grid if Red Bull pulls the trigger and puts a new engine on his RB16B.

On Mercedes’ side, Hamilton and last year’s race winner, Valtteri Bottas, might be favourites at Sochi, given the team’s form around the track since 2014 and both drivers’ performances there too. Of course, Red Bull could definitely be competitive at the track, as Honda’s upgraded engine could give them a shot at another upset on a “Mercedes” track.

Behind the title-contending teams and drivers, McLaren and Ferrari are going to resume their big battle for third place in the World Constructors’ Championship. McLaren is coming off a brilliant 1-2 at Monza, with Daniel Ricciardo and Lando Norris in the top spots, and a big part of that was on merit.

On the other hand, Ferrari drivers Charles Leclerc and Carlos Sainz finished fourth and sixth in Italy and need a big result against McLaren. Leclerc, on his side, is set to start the race from the back of the grid after the Maranello-based team decided to put an upgraded hybrid system on the engine of his car. 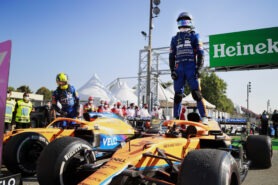 McLaren has 215 points over the Scuderia’s 201.5. Alpine (with Fernando Alonso and Esteban Ocon) and AlphaTauri (Pierre Gasly and Yuki Tsunoda) continue closely matched, with the French team in fifth in the WCC with 95 points against AT’s 84.

Aston Martin (Sebastian Vettel and Lance Stroll) remains a bit by themselves on seventh place in the WCC with 59 points. Williams (George Russell and Nicholas Latifi) follows with 22 points in eighth place. Alfa Romeo and Haas (Mick Schumacher and Nikita Mazepin) close out the Constructors’ standings with three and no points, respectively.

Kimi Raikkonen should be returning and fully healthy for Alfa Romeo, after missing the last two Grands Prix due to Covid-19. Antonio Giovinazzi, whose seat at Alfa Romeo remains a much-discussed topic, has had a good run of qualifying sessions and will be desperate to put up a nice Sunday effort at Sochi.

Russia’s entrance in Formula 1 occurred at the start of the Turbo-Hybrid era, which means Mercedes dominated from 2014 to 2016 with little resistance from rivals. Hamilton won in 2014 and 2015, while Nico Rosberg succeeded in 2016. 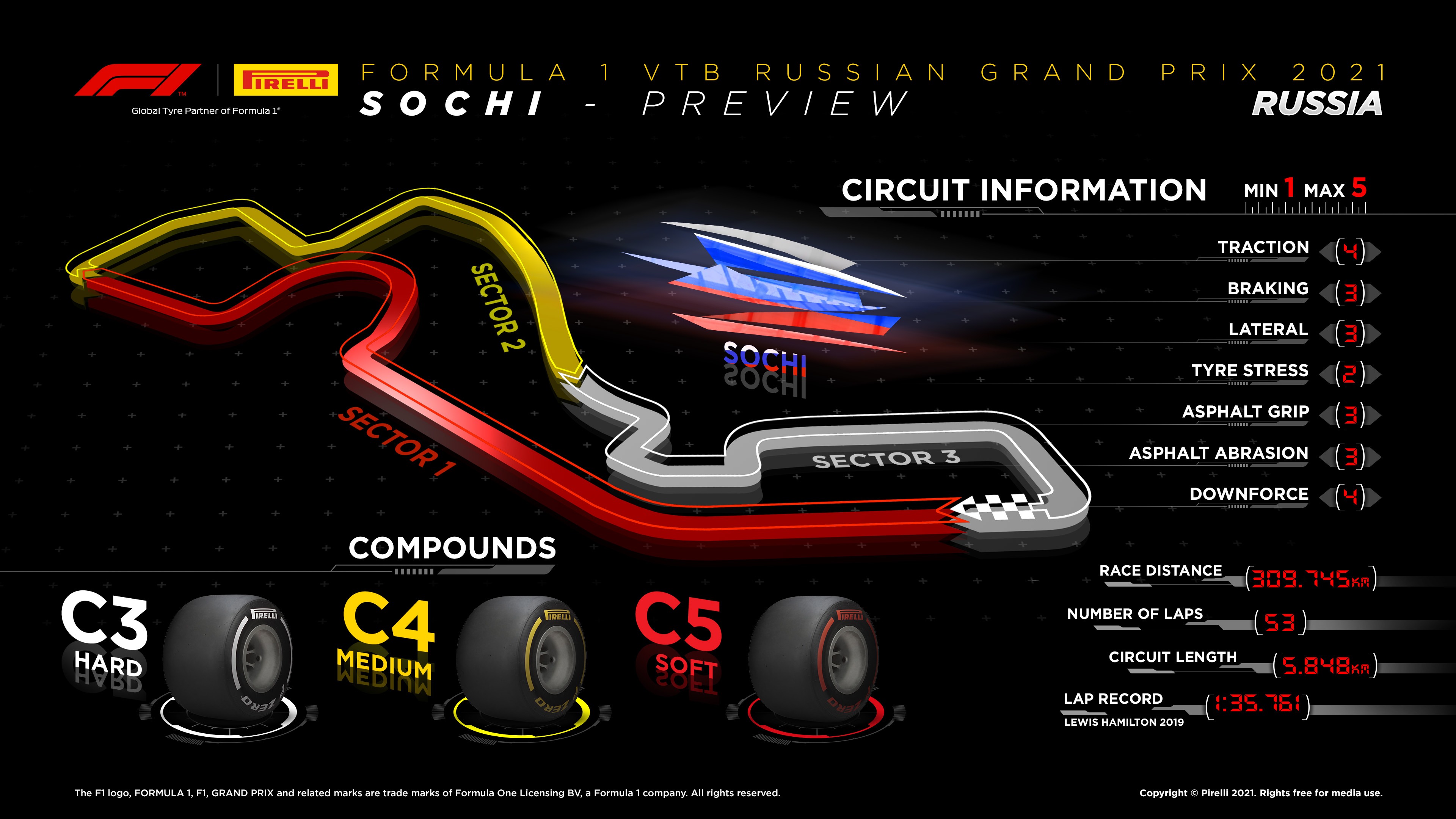 With new aero regulations from 2017, Ferrari qualified on the front row in 2017 and had the stronger package, but a great start from third-placed Bottas (which is usual at Sochi) meant that he took the lead and did not look back, even with Sebastian Vettel following closely in the late stages of the GP in his Ferrari SF70H.

It was Bottas’ first Grand Prix win, but 2018 was different for the Finnish driver, as he started the event from Pole Position, but had to give up the win to Hamilton for the Englishman to further extend his lead in the fight for the title with Vettel.

In 2019, Ferrari was on Pole Position with Charles Leclerc, who was enjoying a fantastic run of results together with a resurgence of Ferrari’s 2019 car, the SF90. The team planned for Leclerc to give a tow to third-placed Vettel at the start so he could overtake second-placed Hamilton off the line.

Vettel did overtake the Mercedes driver, but he also got past Leclerc into Turn 1. The team instructed Vettel to let Leclerc pass, but the German refused to do it, alleging Leclerc was not close enough, and the situation was compromised by Hamilton being close to Leclerc, even after starting on harder tyres than the Ferraris. 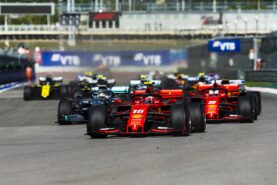 Ultimately, Leclerc performed an undercut on Vettel, who then suffered an engine issue shortly after leaving the pits and had to stop on the track, forcing a Virtual Safety Car. Hamilton had inherited the lead after the Ferraris’ pitstops, but he still had to change tyres. The VSC gave him and P2 Bottas the chance to pit and come out ahead of Leclerc, thus sealing the race in favor of Hamilton and his team.

Ultimately, Hamilton won and Bottas kept Leclerc behind to give Mercedes its sixth straight win at Sochi and the fourth 1-2 for the team at the venue.

Bottas won the Russian round last season after starting from P3 and taking the lead after Hamilton was hit with a penalty for practising his pre-race starts in a forbidden spot. Bottas won the race ahead of Verstappen’s Red Bull and Hamilton, who was shooting for his 91st Grand Prix win and tying the all-time record for wins, had to settle for third.

The 5.848-km track is situated around the Sochi Olympic Park, which hosted the 2014 Winter Olympics.

The circuit has 19 turns and only four can be considered as high-speed corners, with Turn 4 as the most noticeable and providing good chances for overtaking, given the different lines that drivers can take around the long, sweeping left-hander.

The dry tyres for the 2021 Russian Grand Prix will be the C3 as P Zero White hard, C4 as P Zero Yellow Medium, and C5 as P Zero Red soft. 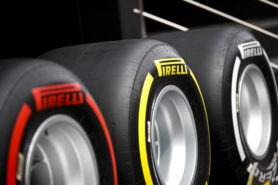 Pirelli tyres in the paddock

Pirelli explained their choice with a statement in a press release: “For the first time since Austria, the three softest compounds in the range have been nominated for this weekend’s Russian Grand Prix: C3 as the P Zero White hard, C4 as the P Zero Yellow medium, and C5 as the P Zero Red soft. This is the same nomination that was made in Russia last season, when the event was held at a similar time of year. Sochi is a low severity track and the track surface has been steadily maturing since the asphalt was originally laid nearly a decade ago. As a result, the softest rubber in the P Zero range is the perfect choice for the Russian track. The weather should be quite mild at this time of year, helping to reduce thermal degradation, although this aspect is more related to the track’s layout and roughness.”

Mario Isola, Pirelli’s head of F1 and car racing, further explained Pirelli’s view of the upcoming weekend, which could also throw some weather curveballs at the entire F1 world: “We’ve seen in the past that there’s been quite a lot of different strategic thinking, with all three compounds on the grid at the start of the race and varying tactics during the Grand Prix.

Last year, the soft C5 performed better than expected and graining levels were reduced over all compounds between free practice and the race, due to high track evolution. In the past, some drivers have even tried a very early switch to the hardest compound and attempted to run all the way to the end, but last year this wasn’t quite possible as these days the asphalt has matured and is not as smooth as it was in the past.

With the extra rubber on track from the very full schedule of support races this time, track evolution and grip should be further enhanced.”

Who will be on the 2021 Russian Grand Prix Podium?

In some of the previous years, it was a little straightforward to predict a Mercedes win at Sochi, a circuit that often suited the car and also the drivers of the German brand. However, if you’re willing to bet on Mercedes’ unbeaten run at Sochi ending, this Sunday could be that day. 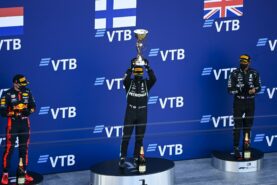 Of course, if Red Bull elects to have Verstappen on the back of the grid with a penalty and a brand new engine, that would make things easier for other drivers to win, mainly Mercedes’ Lewis Hamilton. However, the weekend at Sochi is expected to be difficult for everyone, with tough weather expected for the three days of action.

Mercedes has also been vulnerable this year, not only with the W12 lacking pace to match Red Bull at certain tracks but also with driver errors and strategic mistakes. In recent tracks in which Mercedes should’ve taken wins, such as Hungary and Italy, circumstances prompted strategic errors or race-ending crashes, and that has left Mercedes without the possibility to take advantage of a track that suits the car.

This weekend at Russia, Mercedes will have to deal with more conditions that could hinder their performances at a favourable track, and anyone could be challenging for a win. After all, we have seen four teams win races this year, with Alpine and McLaren joining the Top 2 brands at the top of the podium.

Could another team join that group? Well, we should at least expect a race to take place under rainy conditions. Given what we saw at Spa-Francorchamps, heavy rain could mean all sorts of trouble for the Grand Prix.

Still, Lewis Hamilton will have a big chance in front of him to retake the lead of the World Championship if Mercedes and the seven-time World Champion can deliver as a team. The rain will definitely make things more interesting, and we should not count out anyone under those circumstances.

The tentative prediction for the top three of the 2021 Russian Grand Prix is 1. Lewis Hamilton, 2. Sergio Perez, 3. Valtteri Bottas. 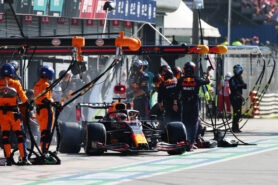 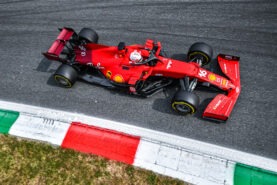 No new Ferrari power unit yet for Carlos Sainz