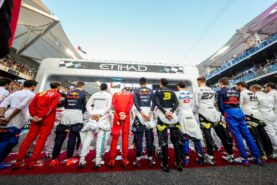 On the 12th of January 2021 the schedule was altered due to covid-19 restrictions by the authorities of Australia and China. The Australian GP got postponed to the 21st of November. The Chinese GP was replaced by the Emilia Romagna GP. The race in Vietnam (no. 4) is still to be confirmed.

The other big change is off course the additional race in Saudi Arabia at the end of the calendar. If the 2021 F1 schedule will be like below is yet to be seen. A lot will be depending on the coronavirus developments.

In the beginning of March the Portuguese GP was added to full-up the gap that was left by the cancellation of the Vietnamese GP. In April rumours got out the Canadian GP will be replaced with a race on the Nurburgring. The Turkish GP was replacing the Canadian GP, but was unfortunately also cancelled.

The French GP was moved to the week before and the Styrian GP was put between the French and Austrian GP to have a triple header. On the 4th of June the news got out that the Singapore GP has been cancelled. Rumours say that a second GP in the US might replace the event.

On the 25th of June the news got out that the Singapore GP will be replaced by GP of Turkey. On July six the already postponed Australian GP got cancelled after all. Up till now it's unknown which GP will fill in the gap of the 21st race of end November.

During the summer break the news got out on the 18th of August that the Japanese F1 GP has been cancelled. On the 28th of August the calendar was revised to 22 races. Qatar will probably replace the race on the 21st of November. The Turkish race weekend that was planned on the 3rd of October was deleted and the race will be held 1 week later instead.

Qatar was confirmed on the 30th of September. It's the third race of the second triple header this season.

Nov.29 - F1 veteran Kimi Raikkonen denies that the schedule in Formula 1 is more hectic in the modern era. At 42, the Finn and 2007 world champion is the oldest and..

Nov.26 - The past month or so may have been the "toughest" sequence of grands prix in Formula 1 history. That is the view of Gunther Steiner, who runs the sport's smallest and -..

Nov.21 - The penultimate round in one of the most thrilling world championship battles of all time may reportedly take place on "half a construction site". Formula 1 officials..

The triple header begins! Join George Russell, Nicholas Latifi and the Williams Racing team in Mexico as they take on the Mexico City Grand Prix with Williams: Off Grid! Please..

Nov.11 - Multiple Formula 1 teams are missing key equipment after a logistics delay in the few days between the Mexican and Brazilian grand prix. Some, including Fernando Alonso,..

Masi says 'still a lot do' at new Saudi circuit

Nov.9 - There is still "a lot to do" to get the new Jeddah street circuit ready for the forthcoming and inaugural Saudi Arabian GP. Days ago, race boss Martin Whitaker responded..

Alonso thinks current triple-header 'on the limit' for F1 teams

Nov.9 - Formula 1's current 'triple header' of races through three separate and distant international countries is "on the limit" for team staff. That is the view of two-time..

Nov.6 - Carlos Sainz has admitted he was feeling some "fatigue" as the gruelling 2021 season approaches its climax. This weekend, a particularly arduous and controversial..

Nov.5 - The boss of the new Saudi Arabian GP insists that construction of the Jeddah street circuit will be ready in time for December's inaugural race. New photos from the site..

This F1 schedule can also be put into your private calendar, so you will always see when each F1 event is held.All upcoming F1 events and future Formula 1 test will be added constantly, so you will never miss out on any F1 event.